A record of why and how Ossett Primative Methodist Church obtained a new Choir Stand in 1994. 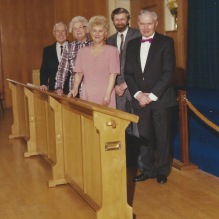 The new Choir Stand at Ossett Primitive Methodist Church with those who contributed to its creation. Left to right - Mr and Mrs Barson, Wendy Wilby, David Wilby and George Wilby.

In 1991, David Arthur Wilby was contacted at Ossett United Reformed Church by Mr and Mrs Roy Barson. Mrs Barson had noticed that, when the ladies were on the front row of the Choir, they had no where to put their second hymn books so they had to be placed on the floor. Mr and Mrs Barson then asked David if he would be prepared to make, on a voluntary basis, some Choir Stands for the ladies to put their hymn books on. Mr and Mrs Barson would be happy to donate money for the materials required.

Plans were drawn up by George Wilby, David’s father who was a draughtsman by trade. These plans were then submitted to the Church Elders who approved the construction of the Choir Stalls. A quotation was obtained for the American Oak timber required from Joe Bland, the timber merchants of Liversedge and other small items from various suppliers at a cost of about three hundred and seventy pounds. 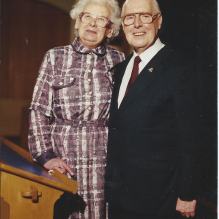 The American Oak was first put into the United Reformed Church cellars for six months to bring the moisture content down. George Steel and Sons, Joiners and Undertakers kindly did rebating and moulding on the oak free of charge.

Work started on the construction of the Choir Stalls at the beginning of 1992. The work was all done by hand which made work very slow but finally on the 27th March, 1994 the Choir Stalls were brought into Ossett United Reformed Church, Queens Terrace. This was a very proud moment for Mr and Mrs Barson and David Wilby. Later the Choir Stands were moved to The United Reformed and Kingsway Methodist Churches when they amalgamated.

Soon after the Choir Stands were completed, authorisation was granted by the United Reformed Church for a plaque to be put on one end of the Choir Stands in memory of Mary Wilby who died on 25th December, 1992, wife of George and mother of David

David Wilby with the Choir Stand he created.