Growing Up In Ossett A Hundred Years Ago.

My father , Sydney Brammer, about whom I am going to tell you was the first generation of our family to be born in Ossett. The family came here from Aberdeenshire via Sheffield and Barnsley. John Brammer my great, great grandfather, came from Scotland as a young man and started a tailoring business in the heart of Sheffield. James, John's youngest child, became a miner and by the time his youngest child Fred was born, was living and working in Worsborough, near Barnsley. As was the practice in those days, miners followed the work and by 1891 the family were living on The Green in Ossett. Fred was my father's father . His parents were in their early forties when he was born and Emma Walker, his mother, who was born in Flockton died in 1897 when my grandfather was only ten years old. Unlike his older brothersFred did not follow James into mining but became a millworker. At the time of my father's birth, Fred and Emma (Marshall) were living at Springmill Cottages Flushdyke (see drawing in part 1), so presumably Fred was employed at the adjacent mill. By now all the other Brammer males had returned to Barnsley but Fred had chosen another line of employment. His war records are partly destroyed by fire but it is possible to decipher that he embarked for France with the K.O.Y.L.I. 12th. Battalion on December 12th 1916 and was posted to the East Yorkshire Regiment 1st. Battalion on December 30th 1916. He died in action, shot by a sniper, on April 9th 1917, Palm Sunday, in battle near Arras. Reports show that it snowed on that day . My father's future also changed on that day.

Part 1 of "Margaret Wilby tells stories about her father's childhood in Flushdyke, Ossett"

In this part of my story I tell of how I think my father may have felt being an only child whose father was killed in WW1 in 1917 whilst my father was still very young. He was left with a sickly mother to look after. I mention the care he had to give her and how he would walk from Flushdyke to Dewsbury each Saturday to do the shopping.

I think my father and mother hesitated to marry whilst he was caring for my grandmother. They did marry very soon after her death and he had a new suit made for the occasions. He is also wearing it in the photo of their wedding.

I go back to his school days, the friendships he formed, the school football team he played in, "Empire Day" celebrations in school, the methods of teaching and the practice of children having their chests rubbed with goose grease and stitched into their vests for the duration of winter.

The original grave marker erected on Fred Brammer’s grave in 1917.

The present memorial on my grandfather's WW1 war grave at St. Martin-sue-Cojeul near Arras. His grave is planted with a white rose bush symbolising his Yorkshire Regiment. I

A very poignant postcard sent from France in WW1 from Fred Brammer to his son Sydney. See next photo for the message on reverse.

The message to Sydney from his father Fred from WW1. Unfortunately Fred was killed by a sniper's bullet in 1917.

Spring Mill Yard where Sydney Brammer was born. This drawing is by Douglas his son and appears in a book of his works "Sketches of Past Times, Flushdyke and Ossett".

The Mill Dam at Spring Mill Used by local children, very much against parents’ instructions and warnings. It was nicknamed the Lido.

My father, Sydney Brammer as a child. Inset of him later with his mother shortly before her death.

Sydney Brammer and Eleanor Morton’s, my parents on their wedding day, Dec 26th 1931. Note the bowler hat and spats.

Sydney Brammer - third row and sixth from the right.
Empire Day at Flushdyke School. The first one was held 24th May 1902 and the last in the 1950's. Empire day 1917 just after his father had been killed.
Each Empire Day, millions of school children from all walks of life across the length and breadth of the British Empire would typically salute the union flag and sing patriotic songs like Jerusalem and God Save the Queen. They would hear inspirational speeches and listen to tales of ‘daring do’ from across the Empire, stories that included such heroes as Clive of India, Wolfe of Québec and ‘Chinese Gordon’ of Khartoum. But of course the real highlight of the day for the children was that they were let of school early in order to take part in the thousands of marches, maypole dances, concerts and parties that celebrated the event. 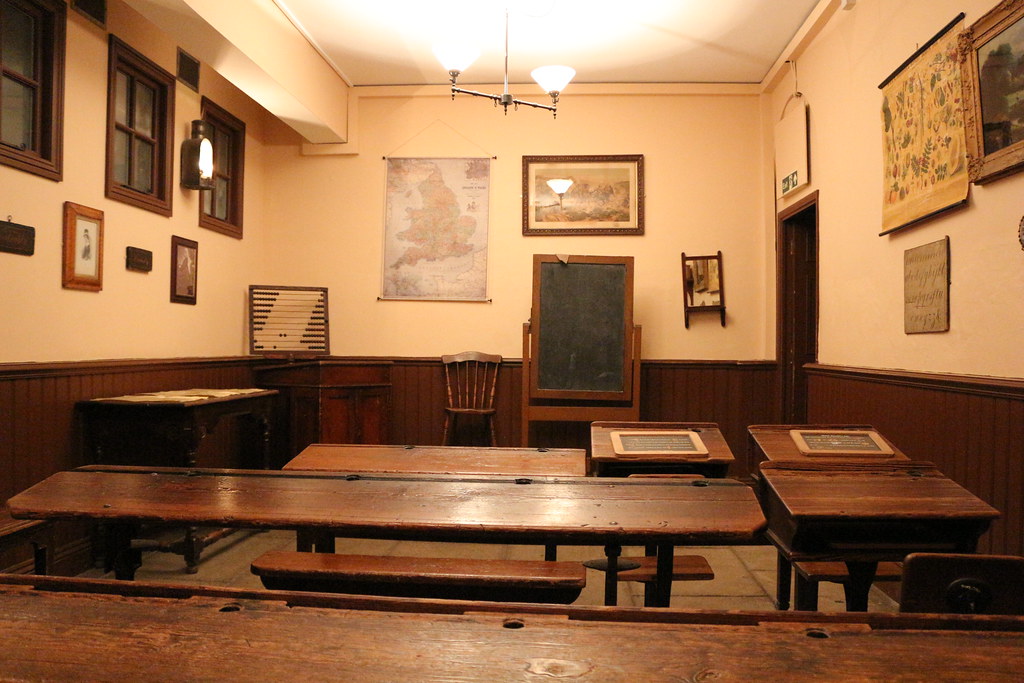 A classroom with slates.

For those who would like to read more about the Battle of St. Martin-sur-Cojeul, near Arras on 9th April, 1917 click here.

Part 2 of "Margaret Wilby tells stories about her father's boyhood in Flushdyke, Ossett".

I start this part of my story with a tale of how my father had to deal with a delicate matter at school. This is followed by recalling how boys at that time improvised to make their own footballs and it concludes with some consideration of early twentieth religious and moral values.

Flushdyke school as drawn by Douglas Brammer. Note the high wall on the right from which Sydney's friend jumped and broke both his wrists leading up to Sydney's "delicate situation".