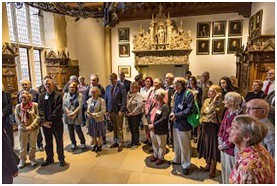 In the last week of September, a group of 20 people visited York’s twin town Münster to celebrate the 60-year anniversary of the partnership, which began in 1957. Among this group were some members of the U3A, including some from the German Conversation group.
Our hosts had planned a busy schedule, but fortunately, most of the activities were easily accessible, as Münster, like York, has a fairly small town centre. Unlike York, there are no longer any city walls, but these have been replaced with a wide central path, “die Promenade,” all around the city, where cyclists are in seventh heaven as they can cycle side-by-side while sitting majestically on the large-wheeled town bikes. On either side are paths for pedestrians and overhead are the arches of well-trained trees, with the sun glinting through to give that glorious dappled shade. At least that was our experience at the beginning of autumn.
Most days started at the Rathaus (town hall) or the Domplatz (market place), and at some point, there was a speech by a mayor or a talk by a guide. In fact, I have never been in the presence of so many mayors, past and present, of different ranks, but this added to the experience. One of the most important things that Münster is famous for is that it brokered the peace deal “The Peace of Westphalia” in 1648 after the 30 Years’ War when Holland became an independent nation from Spain. Fittingly, we were told about this in the Peace Hall where the signing took place.
We were shown round St Paul’s cathedral in the heart of the city and came out onto the bustling market where many stalls were selling the speciality of the region, Reibekuchen, a sort of potato fritter, eaten locally with apple sauce. Unfortunately, this must be eaten standing, and we preferred a more comfortable lunch venue before boarding the open top red double-decker tourist bus. This took us all over the city and provided a good history in translation. 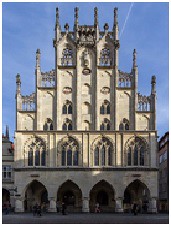 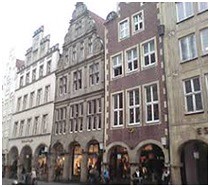 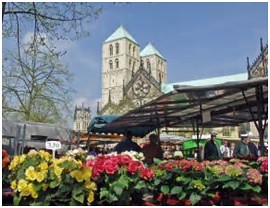 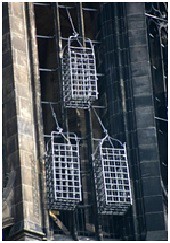 There are cobbled streets everywhere in the historic old quarter, and medieval buildings with their beautiful reconstructed facades and arched walkways take you back to former times. One of the many churches, the Lambertikirche, has metal cages still hanging from its high towers where the dead bodies of leading Anabaptists were displayed as an example to all back in 1536.
As we were jointly celebrating our link with Münster with Kristiansand, one of its other eight partners, many other cultural treats awaited us, like a musical evening with choirs from Norway and Germany, slides of key places in all three countries and, of course, mayoral speeches from those twin towns. Markus Lewe’s speech inspired me because it reminded me of why I was there and the ideals of town twinning which the trip was keeping very much alive. To finish, we were entertained with a special cabaret which allowed us to interact, and enjoy German humour at its best.
During our visit, we were taken on a tour of items forming part of the open-air Sculpture Project, which takes place only every ten years. Apparently, when modern sculpture first appeared in Münster, it was treated with great suspicion. However, as more and more visitors were attracted to the city because of this, the people of Münster gradually grew to like it and be proud of it. It was certainly a talking point as it redefined the meaning of “sculpture”.
There were so many highlights – a trip on Lake Aa to visit the Farm Museum, the Museum of Art and Culture, the Botanical Gardens, the harbour with its special sculpture of stepping stones set just below water level so that anyone crossing looked as though they were actually walking on water, the beautiful baroque Clemenskirche, and the student area around the Kuhviertel where I was staying, which is a 5 minute-walk from the old medieval town (which is actually used regularly for filming a famous crime series). There is every reason for making a return visit. 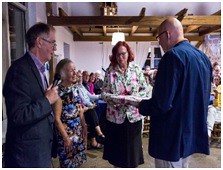 The Secretary and Chair from the twinning association in York present gifts to Bernhard and Marianne from the Münster Partnershaftverein.

It goes without saying that the trip was only such a success because of the hard work and planning that went into it, starting with being met at Düsseldorf airport, taken by ‘sky train’ to the station, given refreshments and accompanied to Münster for an unforgettable experience. Hospitality and friendship continued all week, culminating in the delicious meal served to us at Hof Hesselmann and the sad farewells at the station. It was an exhausting but unforgettable week. 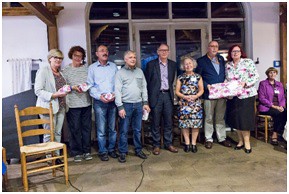 Members of the Münster and York Twinning Association committees in Hof Hesselmann. 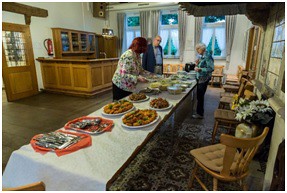 Food at the farewell 'do' in Hof Hesslmann.