An English conversation class comes for a long weekend to York by Margarete Wells. 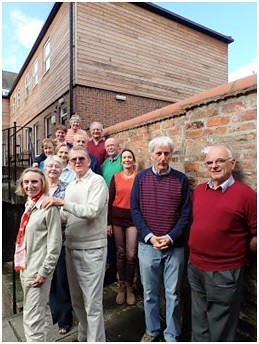 At the back of the U3A

Quite unexpectedly I received an email from Münster asking if their English Conversation class could meet up with our U3A German Conversation group. Well, that was an opportunity too good to turn down, even though our first official meeting of the year was
not until 5 weeks later. Many email and phone calls later, it was arranged: the U3A kindly let us hire a room and York members made every effort to come along for this extra meeting, though some were still on holiday.
Our visitors loved the central location of the room as they have to travel 20 km out of Münster to a community hall for their conversation classes – a beautiful and large venue, catering for many groups. (In fact, this place – Hof Hesselmann – is where the town twinning group had their farewell meal with speeches and presentations a few weeks later.)
Our U3A group wanted to take advantage of having real Germans with us, so instead of the normal reading and discussion, we had a Q and A about all things German. This meant we could finally find out all the answers to those questions we were dying to ask. Of course, the topic of Angele Merkel’s re-election came up. Who could have foreseen that she would have such a narrow majority? After coffee and delicious German biscuits and sausage, we switched to talking in English and our visitors told us about what was making the headlines in
Germany – big and small items, serious and funny. It was a great opportunity to be and talk together, to exchange views and practise our language at the same time.

At the end of the morning, our German visitors, who were all here for the first time, went off on a sightseeing tour and in the evening, we met again at the Town Twinning social. 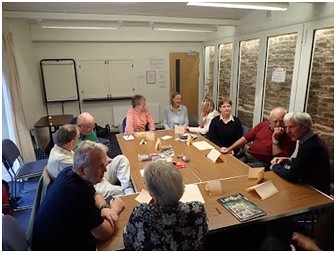 Getting to know each other and finding a lot in common