This is a short account as to how John Bishop, the renown stand up comedian, came to do a "two show" night at Ossett Town Hall. It is written by Howard Lawton who was instrumental in making it all happen.

My name is Howard Lawton and I have lived in Gawthorpe with my wife, Debbie, for almost 40 years. I first met John Bishop just over 10 years ago when he appeared at the City Varieties in Leeds, although virtually unknown at that time my work colleague a big Liverpool fan knew of John Bishop and suggested that we should go to his show.
We rallied the guys at work and 6 of us purchased tickets little knowing at the time we would be a significant percentage of the audience as not many tickets had sold. John Bishop was extremely funny but it was rather a strange gig because one guy decided to heckle John all the way through the first half of the show which annoyed the small audience (about 37 of us) and John Bishop eventually turned on the guy with some great put downs. The heckler disappeared at the interval and John Bishop writes about this memorable show in his autobiography .

At the end of the show John Bishop asked if we fancied a beer and we chatted about the show and Liverpool Football Club etc and found him to be a really lovely guy. We attended a couple of John's gigs soon after the City Variety show and again met John after the shows for a chat. John was now appearing on TV and his shows were selling out but he still had time to catch up with us and he named us "The Leeds Originals" after our first meeting at Leeds City Varieties.

John Bishop always told us that if he got to play the London Palladium he would invite us to London but that was aways going to be difficult for 6 lads working together, however, we noticed John was performing at the First Direct Arena in Leeds a couple of years ago and asked if we could swap the London Palladium tickets for Leeds and John was happy to oblige and arranged for us to go back stage for a beer with him before the show for a catch up! 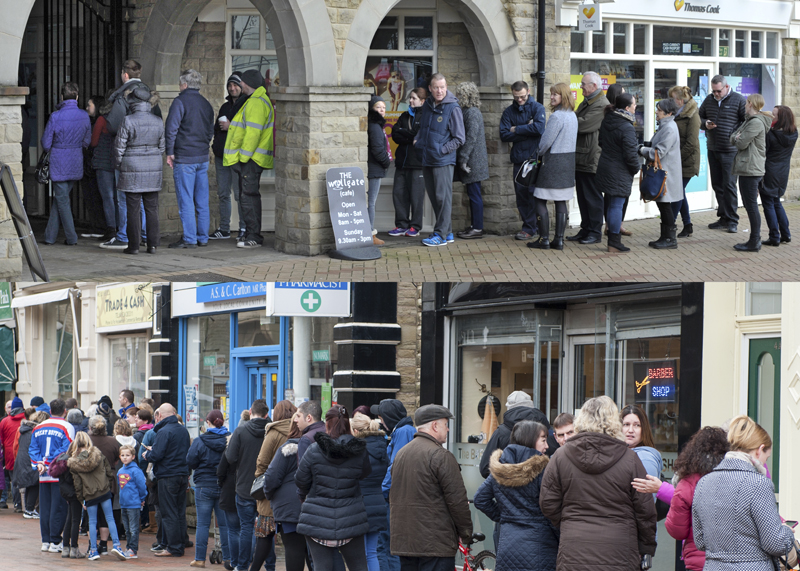 Large queues in Ossett for tickets to John's shows. 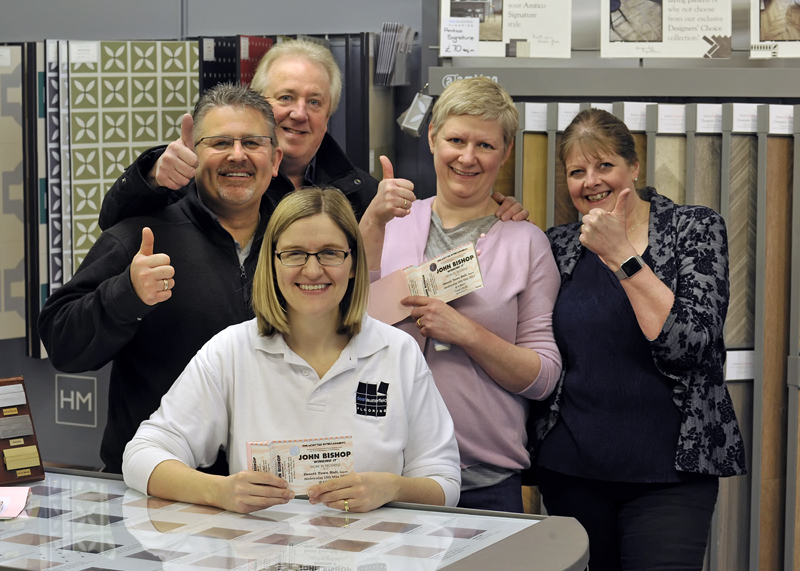 Very happy team working towards John's visit to Ossett.
The author, Howard Lawton, is at the back. In the middle is Dean Austerfield of Dean Austerfield, Carpets, Debbie Squires from Squires Deli and Debbie Lawton, Howard's wife and
Dean's wife, Louise, is seated at the front.

Although I had met John on several occasion's John Bishop was now a big name in comedy, one of the biggest in the Country and selling out Arena's so I knew the task wouldn't be easy. It wasn't a case of just asking John Bishop if he would perform at Ossett Town Hall I would have to go through his Management Company and Promotions Company so had to give them good reason for John to perform.

With hundreds of different venues up and down the country I thought I needed to do something different to attract the attention of John and his Management and thought it would be a quirky idea to start the Unofficial John Bishop Ossett Town Hall Facebook Page with my wife Debbie specifically to invite John to perform at Ossett Town Hall.

Debbie and I set up the page and put a link on the You Know You Have Lived in Ossett Facebook page and within minutes people were liking the new page and leaving positive comments and photographs of themselves with John Bishop. Within a period of time the Unofficial John Bishop Facebook Page had over 1000 likes which was superb.

It was at this point that I started to communicate with his Management who advised me that John wouldn't be touring in 2016. I continued to ask the question and then in early 2017 I got a message asking if the Town Hall was free on the 10th May. I checked with the Events Team in WMDC and they confirmed the date was available. I immediately went back to John's people with the information and after a few more discussions I got the phone call to confirm that they and John were happy for him to perform at Ossett Town Hall. John Bishop had seen the number of likes on the Facebook page and made the generous offer of doing two gigs. I remember putting the phone down full of excitement and elation. It was almost 2 years since I had set up the Unofficial John Bishop Ossett Town Hall Page and now my dream had come true.

We set up the Facebook page to involve the community and when we got the go ahead decided that the best way to ensure that the community had a good chance of getting tickets for the shows was to sell them in Town Centre shops and want to thank Debbie and Peter Squires, Louise and Dean Austerfield and Mark Ellerker for their help and support.

We sold tickets for the two performances on different days and 1000 tickets sold out in minutes with some people queuing for tickets from 3.00am in the morning. There was great camaraderie in the queues for tickets and know that some new friendships have been formed

The 10th May was a fabulous day and both show's were a massive success with John Bishop getting a rapturous reception at both show's. He talked on stage about how we had met at the City Varieties ten years previous and thanked us for our continued support.

There was an added element at the 6pm show with Tom Newham (The Lighting Manager) and Rebecca Firth (Stage Manager) getting engaged on stage. John Bishop helped with the plan to bring both Tom and Rebecca on stage so that Tom could propose and Rebecca accepted in front of a full house. I am sure that Tom and Rebecca will never forget this and we send them both our very best wishes.

John Bishop was in Ossett for about 6hrs and got to meet lots of lovely people and enjoyed his time. He did 3 live Facebook video's from the Town Hall and with over 121,000 people watching from all over the world.

After leaving John also tweeted to his 3.7 million followers "Thank you Ossett - two show's in one night and both as good as each other. thank you all for coming - I know everyone in the Town now "

So, that was it, with the Facebook page and the community support we achieved what we had set out to do. John Bishop came to Ossett and performed to more than 1000 people and brought lots of fun and laughter to our wonderful Town Hall.
The feedback has been excellent and we genuinely believe that John Bishop put Ossett on the map.