In 2012 I visited Münster for the first time. I went to find out more about the city and its twinning with York and to consider whether I wanted to get involved in rekindling the Twinning Association in York.

The Prinzipalmarkt in Münster (left) and Stonegate in York. York and Münster have been twinned since 1957.

I had been hearing about the city of Münster for years. Our old friends Andy Hodges and Tricia Miller had told us of their trips to Münster with Cllr. Ken Cooper and Dolly Cooper. Ken and Dolly had been instrumental in keeping the links between York and Münster going, Ken having been Lord Mayor of York twice. As an ex-prisoner of war in the Far East, Ken saw the sense in developing friendships between the citizens of different nations. Ken and Dolly became close friends with Bernhard Brämswig and Marianne Koch in Münster, a friendship which remained for the rest of their lives and which developed into a sort of extended family. Bernhard and Marianne’s daughters grew up to regard Ken and Dolly as their English grandparents. So when Andy and Tricia mentioned that they and Bernhard and Marianne were worried that the York-Münster Twinning Association had become inactive due to an aging membership and ‘would we be interested in helping to rekindling it?’ I knew some of the background.

I had an interest in Germany. My father had seen active service in the 2nd World War on the HMS Prince of Wales, which escorted North Atlantic convoys and was involved in action in which HMS Hood was sunk by the Bismarck and which led to the subsequent sinking of the Bismarck. He was none too keen on Germany or anything German-made and, as children, we had picked up these vibes. He did mellow later in life, eventually coming round sufficiently, in 1989, to choosing a VW Golf as the first and only car he ever purchased brand new. A good choice, I may add, as I inherited it and am still driving it! Over the years, my knowledge of Germany has expanded as I have visited several of my relatives who went to live there. My brother-in-law lived and worked in Berlin and Leipzig, my sister-in-law in Munich and my cousin in the countryside near to Stuttgart. All these relatives had adapted well to life in Germany. Two of them spoke German fluently. I had also been on a school trip, as a teenager learning German, to the Rhine and, later, as an adult to the Lake District near Berlin, to the Baltic coast and to the Bavarian Alps. My impression was of a nation of varied and beautiful countryside, with welcoming, well-educated, community-minded people, good provision of public services and an interesting history and culture.

I had also recently retired from being a secondary school deputy head teacher so was open to suggestions of how I could make myself useful and had met Marianne and Bernhard socially on their visits to York. 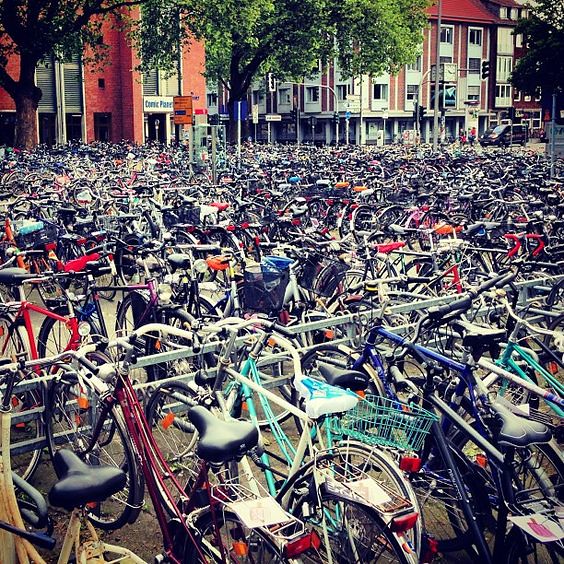 The bicycle park outside Münster HAuptbahnhof.

After some consideration, I agreed to go with Andy and Tricia on a ‘fact finding’ mission to Münster in February 2012 to see for myself what the possibilities were.
The journey was, and still is, quick and convenient. A flight from Leeds-Bradford to Düsseldorf, then a smooth transfer on the airport monorail onto one of the relatively cheap, frequent, clean and fast trains to Münster. We were met at the Hauptbahnhof by Marianne and Bernhard. I was impressed by the sea of thousands of bicycles parked up in the bike park outside the station - an early clue to the effective planning of transport and care for the environment in Münster.
Münster is situated on the river Aa, in a landscape studded with dispersed settlements and farms, the so-called "Münsterland". In addition to the centre of the city, Münster is made up of small urban centres, each surrounded by fields, and well-connected by public transport. It is about 60km from the border with the Netherlands. Other major cities nearby include Dortmund, 38 miles to the south, Osnabrück, 27 miles to the north and Bielefeld, 39 miles to the east. The latter of these towns, together with Münster itself, was home to the many British army personnel stationed in West Germany after 1945, until just a few years ago. 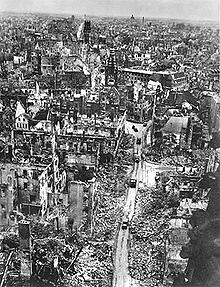 The Prinzipalmarkt after RAF bombing in World War 2.

My trip coincided with a Civic visit by the Lord Mayor of York, David Horton, and other dignitaries. We joined this group and together with groups from some of Münster’s other twinned cities went on a guided tour of the city centre . In addition to York, Münster is also twinned with Orléans in France, Kristiansand in Norway, Monastir in Tunisia, Rishon LeZion in Israel, Fresno in the USA, Ryazan in Russia and Lublin in Poland. The citizens of Münster show a keen interest in their twinning arrangements, which provide many opportunites for co-operation, leisure and work-related experiences. It was a bright day with a blue sunny sky but bitterly cold. My initial impressions were of a prosperous city, with a mixture of modern architecture of good design, public art and an historic centre. I discovered later that much of the medieval city centre had been flattened by the RAF and had been rebuilt, after the war, to the original plan. This was not the priority for reconstruction though. I think it is significant that the theatre was first building reappear - a place to develop new ideas, bring people together and rebuild the community. 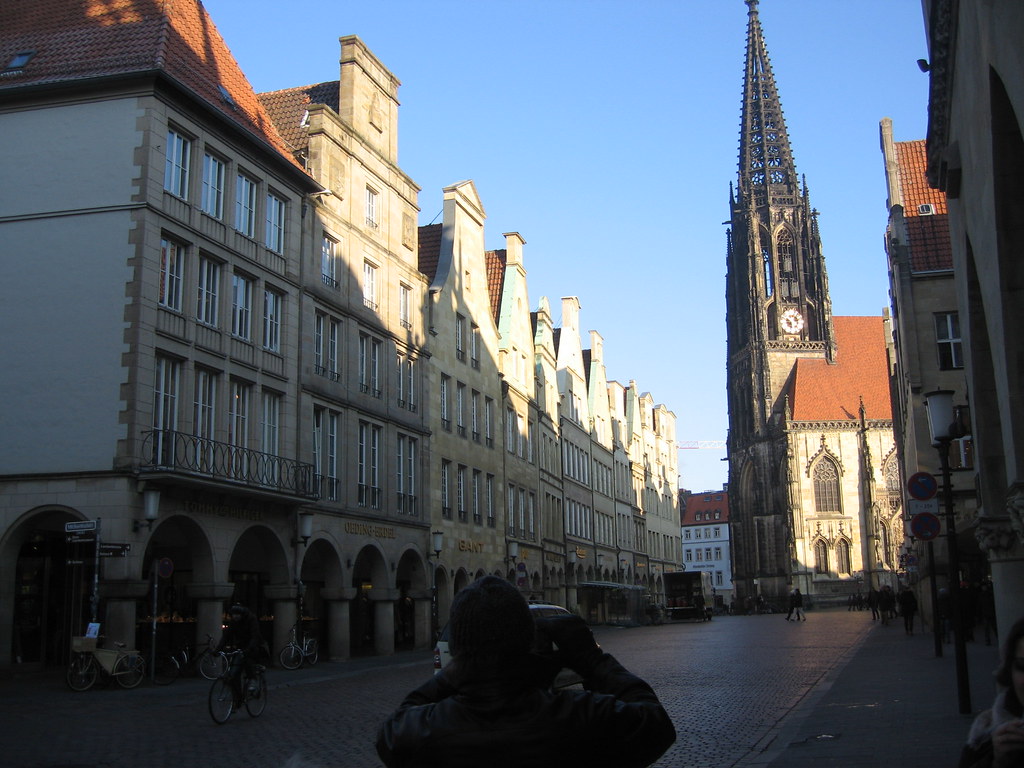 The Prinzipalmarkt is the main shopping street in the 14th Century city centre. We were treated to a guided tour of the Gothic town hall, the Rathaus, with one of the deputy Mayors. This building contains the Peace Hall, in which the Peace of Westphalia treaty which put an end to the Thirty Years' War, was signed in 1648. We visited St Lambert's Church (1375), with three cages hanging from its tower above the clock face. In 1535 these cages were used to display the corpses of Jan van Leiden and other leaders of the Münster Rebellion, who promoted polygamy and renunciation of all property. These were revolutionaries challenging the ruling church authority, who had also caused concern in England to the Tudor establishment, who were themselves not averse to snuffing out their opponents in terrifying ways!
We also saw St. Paulus Dom (St. Paul's Cathedral), from the market place but, unfortunately, due to renovations, we could not go in. The cathedral was built in the 13th century and is a mixture of late Romanesque and early Gothic styles. It was completely restored after World War II. It includes an astronomical clock of 1540, with hand-painted zodiac symbols, which traces the movement of the planets, and plays a Glockenspiel tune every noon, which I have seen in operation on subsequent visits. The market place is thriving with activity on a Saturday, where many locals buy fresh produce and flowers. As in any foreign market, the different variety of fruit and vegetables is always fascinating, not to mention the numerous stalls selling street food ranging from crèpes to German sausages. 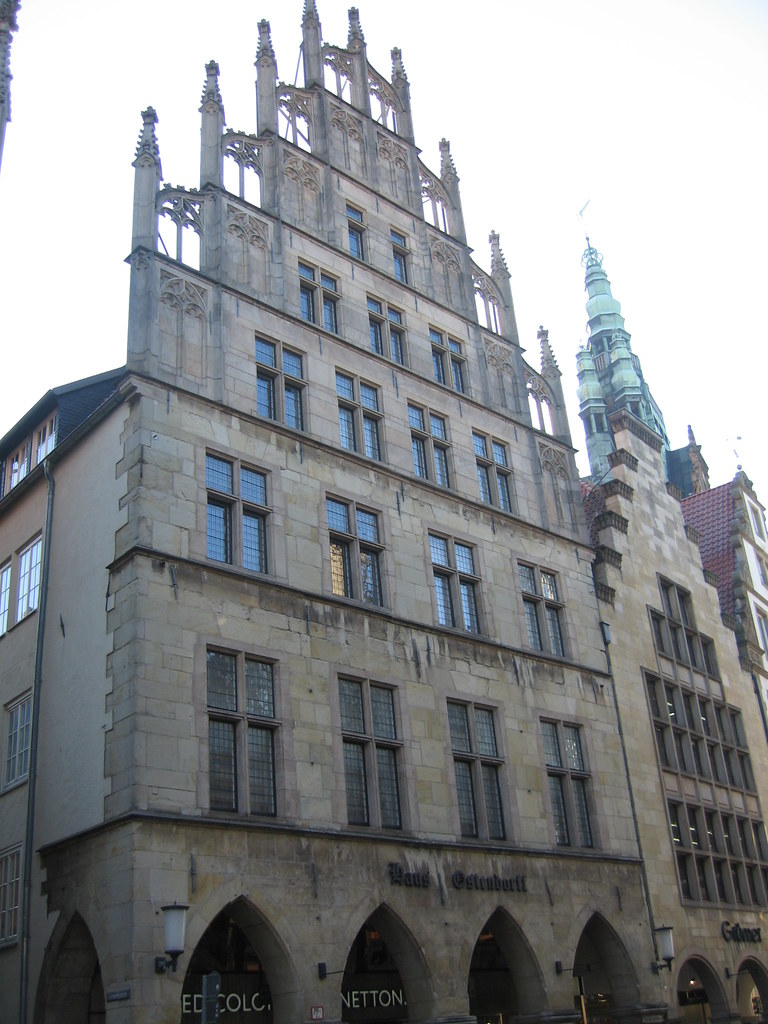 The Gothic town hall, the Rathaus. 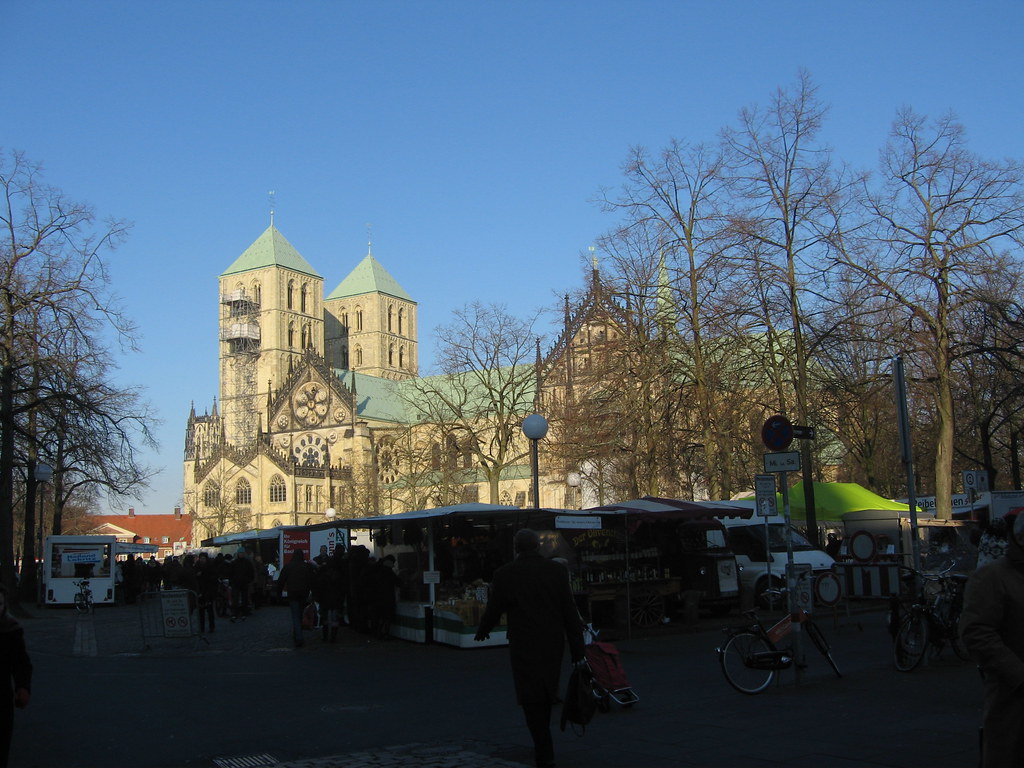 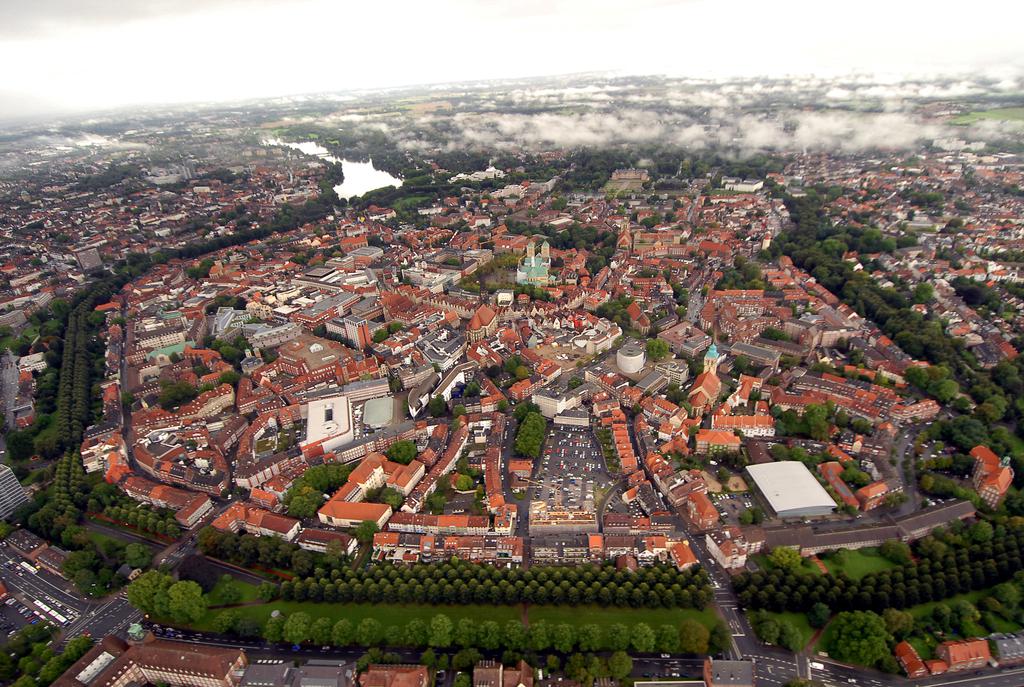 An aerial view of the centre of Münster showing the tree lined position where the city walls once stood.

Münster’s similarities to York struck me. As well as having a medieval centre with a large church, Münster was a walled city. Where the wall stood is now a circular avenue of trees with a cycle track. Cyclists are everywhere, even more so than in York, and are referred to by locals as the ‘silent killers’. You are warned to take care. Münster also has a large pedestrianised area in the centre. Münster has many institutions of higher education, including the University of Münster and University of Applied Sciences and 47,000 students. To cap it all, the founder of the church in Münster, Frisian Liudger , ARRIVED FROM YORK in 793. 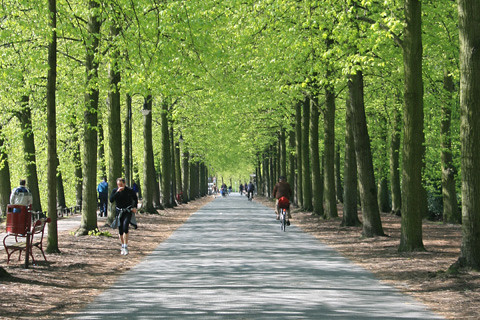 The cycle track and footpath round the city following the site where the city walls once were. 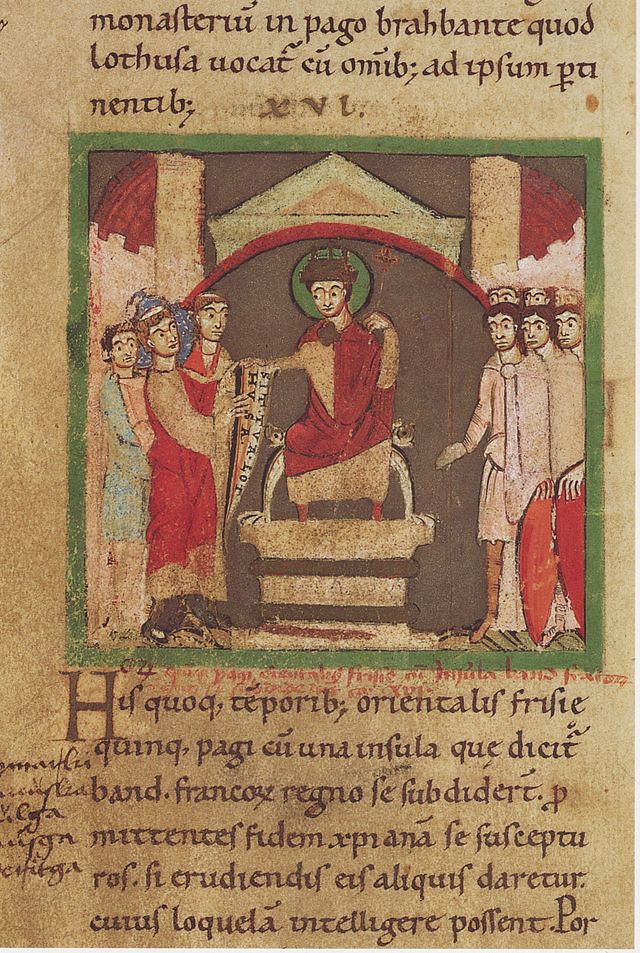 Saint Liudger (born at Zuilen near Utrecht about 742; died 26 March 809 at Billerbeck) was a missionary among the Frisians and Saxons, studied under Alcuin in York and travelled from York and became the first Bishop of Münster.

One of the Stumble Stones or Stolpersteines commemorating a Jewish resident killed by the Nazi regime.

As I had seen elsewhere in Germany, the people of Münster are aware of their more recent past. On our tour we noticed, embedded in paving stones, small brass plaques, Stolpersteines (stumble stones), of which there are 255 in the city. These commemorate the places where Jewish victims of the Nazis regime had lived. I also heard how the city had recently voted in a referendum to rename one of its main streets, which had been named after a prominent Nazi, and how, in the 1940’s the Bishop of Münster, Cardinal Clemens August Graf von Galen, was one of the most prominent critics of the Nazi government.

I was shown great hospitality both by my hosts and by the city. My mastery of the German language is limited, but this did not stop me having interesting conversations, conducted mainly in English. We even enjoyed a theatre visit to see a variety show, a mixture of dance, music, stand-up and acrobats. The stand-up, in German, was mainly lost on me, but the rest was language free!
Münster is a dynamic city, aware of its past and working hard to ensure it develops as an inclusive community. It is very active in creating international links. The York twinning is the oldest (60 years this year) and the link with York is regarded as special by many of the citizens of Münster.
So my visit to Münster worked. I took the bait and have been the secretary of the York-Münster Twinning Association since 2012. Our membership has continued to grow. We look forward to welcoming Münster's Civic party to York in June and to a group of about 20 of our members visiting Münster in September, to join the celebrations of the 60th Anniversary.