This story is based on a series of interviews of Samuel Broadhead Nettleton, an Ossett resident all his life, recorded in Autumn 1989 when Mr. Nettleton was 92. The interviewers were Arthur and Kathleen Shaw. The subject is "Old Ossett".

This story is from the beginning of the tapes and is about Mr. Nettleton's early life, Clegg's farm at the town end of Wesley Street and their move to Millfields and Mr. Shaw's relationship to the Cleggs.

If you wish to listen to a part of the recording and then read my comments about it just tap the recoding window at the appropriate time to pause it. Tap again to restart.

We would like to thank Margaret Nettleton for allowing us to use the recording of her father’s interviews.

Recording of an interview in 1989 by Kathleen and Arthur Shaw of Samual Nettleton, aged 92. Subject - "Old Ossett"

This story is based on part of a recording of "a chat" between Arthur and Kathleen Shaw and Samuel Broadhead Nettleton of Greatfield House, Ossett. The original tape has been edited to take out a few irrelevant passages (the stoking of the fire, the time the interviewer's notes were dropped on the floor, etc.) but these are retained on the original tape. I have tried to write my notes and present my images to follow the chat. The tape starts with Mr. Nettleton being asked about Clegg's farm which was at the bottom of Wesley Street. As it is mentioned again later on in the chat my notes about this are given later.

Arthur Shaw's mother was Mary Ann Clegg, born 22 February 1893 to Arthur and Lydia Clegg. She is shown as a young girl in one of the photographs with her father on the farm. "O'wd Bob", the farm dog is also on the photo. When he became "O'wd Bob" rather than just "Bob" I do not know. Arthur Clegg wrote the following about him, "At the time of the photograph, about 1902, the cows of this farm were pastured past the Turn 'o the Nook - by Love Lane. At milking time Owd Bob would be sent up Wesley Street and would sit at the field gate until the miners came out of Pildacre Pit (later the Water Works), when one of the miners would open the gate and the dog would bring all the cows down to the farm by himself". 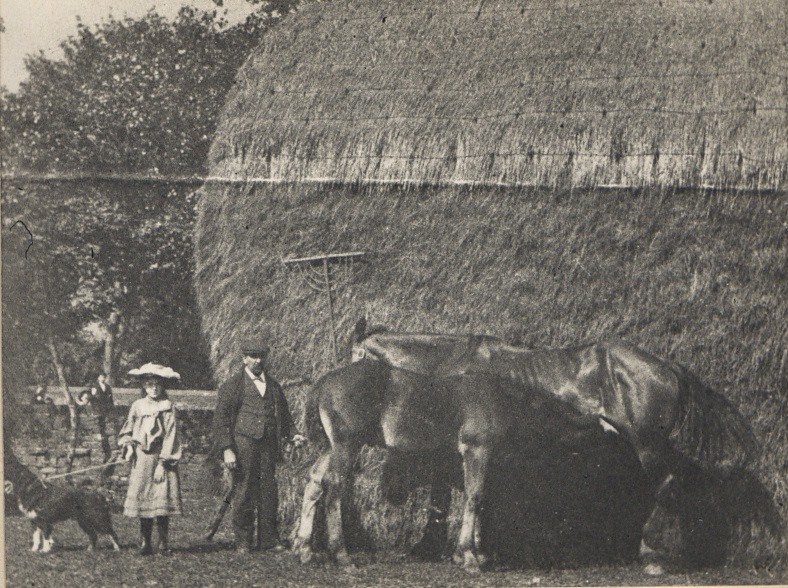 Clegg's farm at the Ossett end of Wesley Street. Mary has O'wd Bob on a lead and is with her father Arthur Clegg. 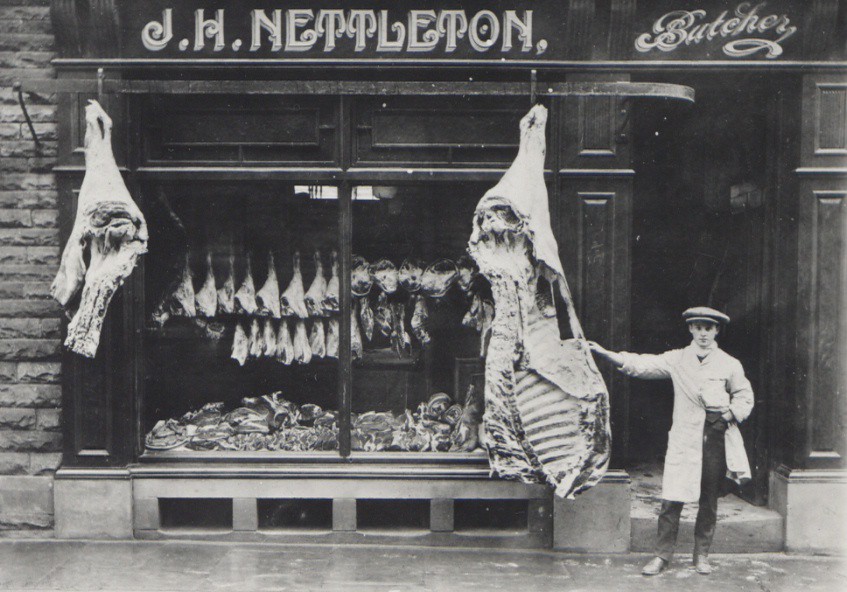 The butchers shop at 9, Wesley Street above which Sam Nettleton was born.

Mr. Nettleton goes on to talk about his early years, born on his father's butchers shop premises at 9, Wesley Street (later renumbered number 11). As a "babe in arms" the family then moved Highfield Villas on Station Road to live and in 1914 the shop moved to new, specially built, premises in the Market Place (Margaret Nettleton has told me that on his birth certificate his birth address is given as “Highfield Villas” - perhaps Sam was mistaken). Sam mentions that the front of the premises is in a material known as "white marble" that was made by The Fire-clay Company. The date stone on the premises is 1913.
They then talk about the property that had been on the site prior to the new shop being built and say that it was a fish and chip shop that had replaced Mr. David Dewhirst Nettleton's corn and hay merchants (described as "rough stuff" by Sam). It mentions that this building had been built in the 1700's and there was an attached cottage with steps into the entrance of Jubb's Yard. These can be seen in the illustrative photograph.
Lands Fold is then mentioned and Mr. Nettleton explains that it was further towards Town End. In fact when looking from Prospect Road it ran from the right of The Railway Tavern (which changed to various names) into the Market Place where the Maypole public house now stands. Lands Fold was demolished in the mid to late 1960's. 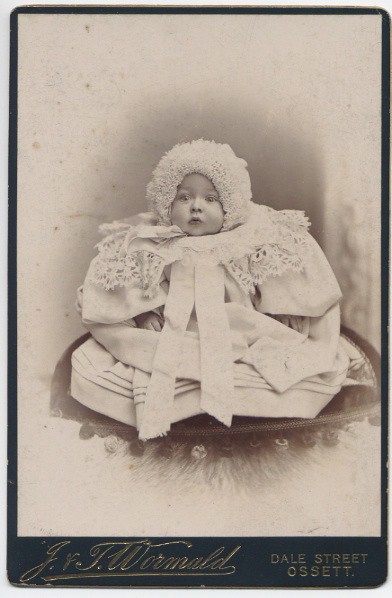 Sam Nettleton in his Chrisening gown. 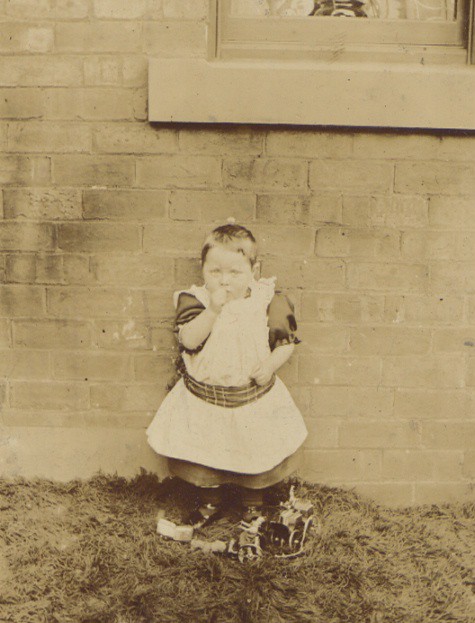 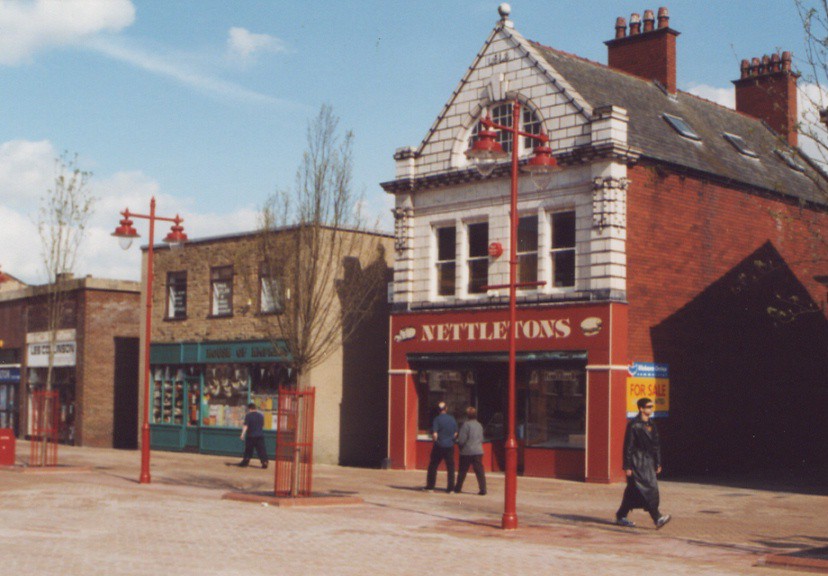 Nettleton's "New" Butchers shop in the Market Place. Built 1913 (date on front of building). The top part is built in "white marble " according to Sam Nettleton. Date on shop is 1913. 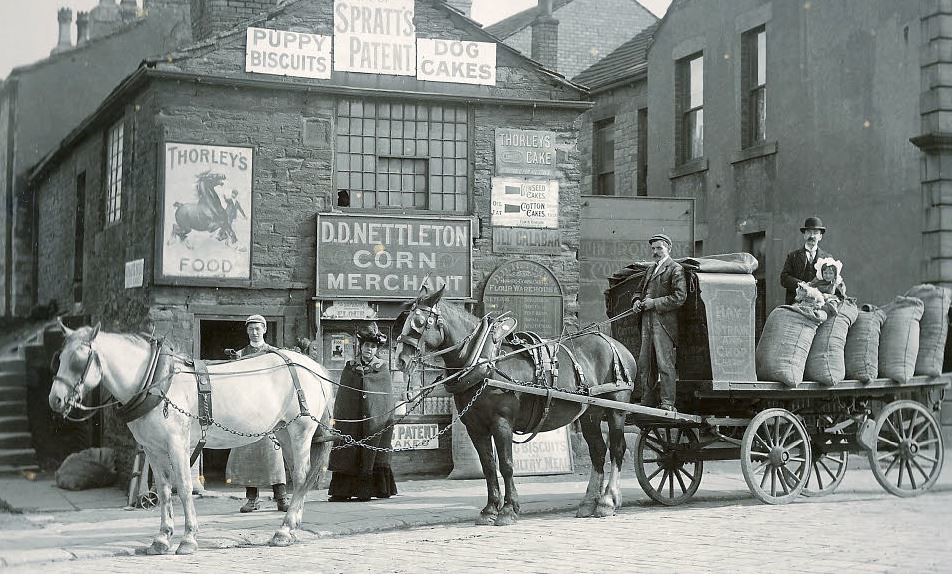 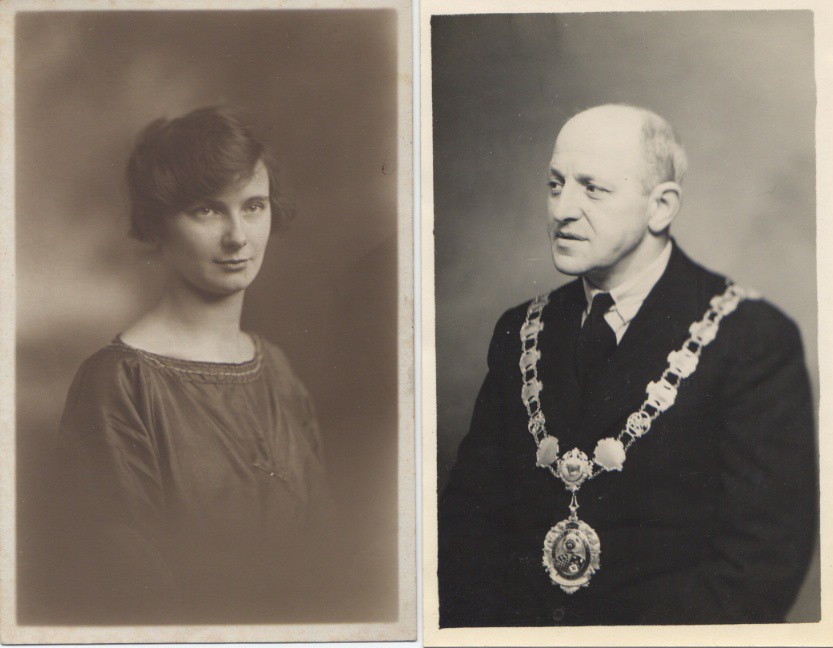 Sam Nettleton and his wife, Ada Alice (nee Gledhill) taken about 1948. Sam is wearing the Chain of Ossett as President of the Dewsbury District Butchers Association. 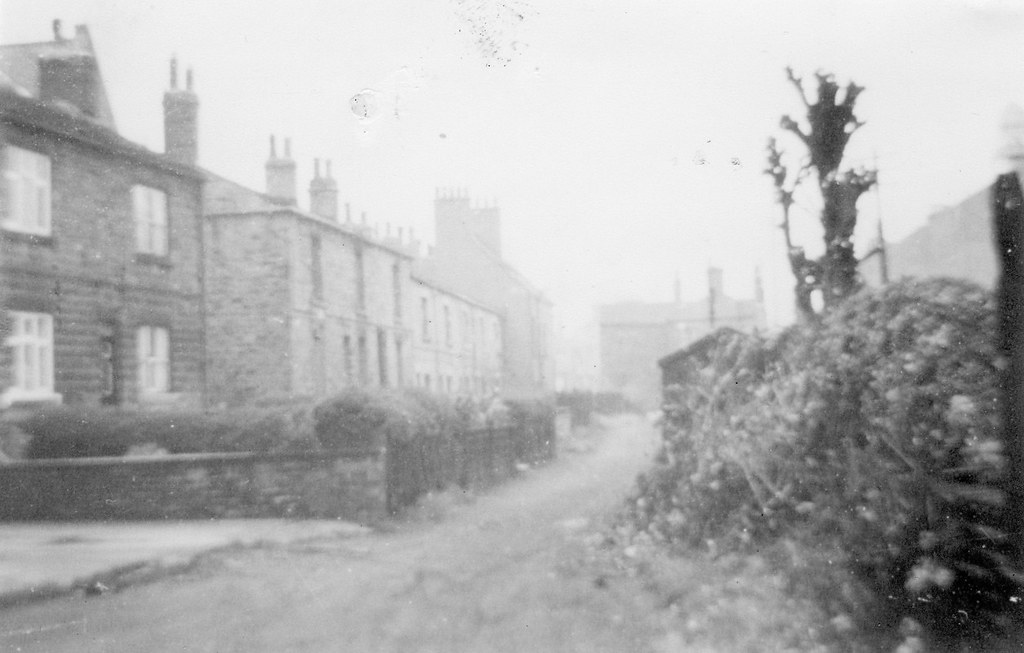 Thought to be a photo of Jubb's Yard taken about 1950.

Jubb's Yard is again mentioned and Arthur Shaw mentions that his family had lived there for a time with his inlaws, the Cleggs. They then moved to Oakwood Cottages behind the Temperence Hall.
A wheelwright's workshop is mention which probably was the one belonging to Walter Ashton. His workshop was "at the back of The Cock and Bottle in 1908". By 1917 he was a Master Wheelwright and Coach Builder with premises on Bank Street and Back Lane. As can be seen in the photo of a wagon they fitted out for Langley Brothers there is a door (the small one behind the wagon) that led to the ginnell between the two roads so perhaps it was one workshop stretching between the two roads. This workshop is where the Iceland store now stands. 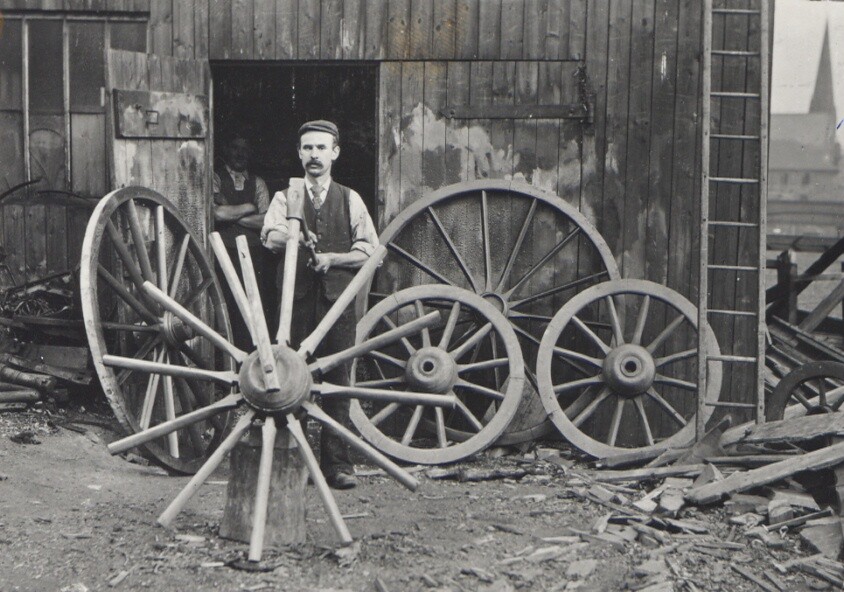 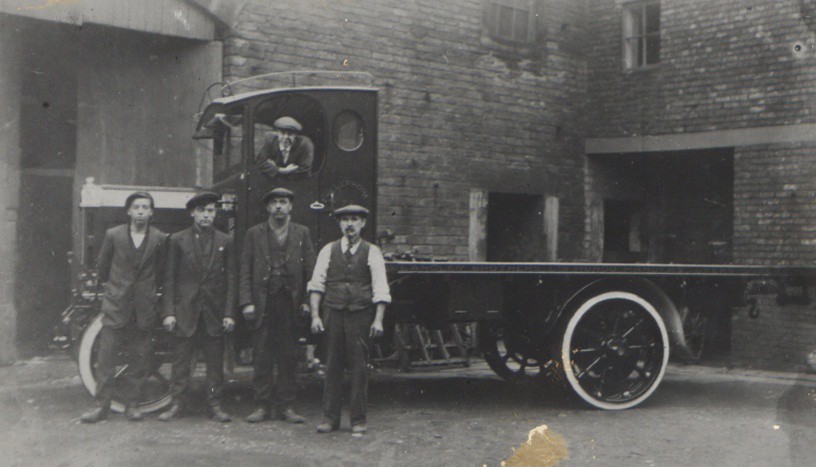 The bodywork on this Leyland chassis was made by Walter Ashton. He is on the right of the four men in front. Ernest Ashton is in the cab. The newly finished bodywork fitted exactly on the chassis when it was lowered on by the crane. 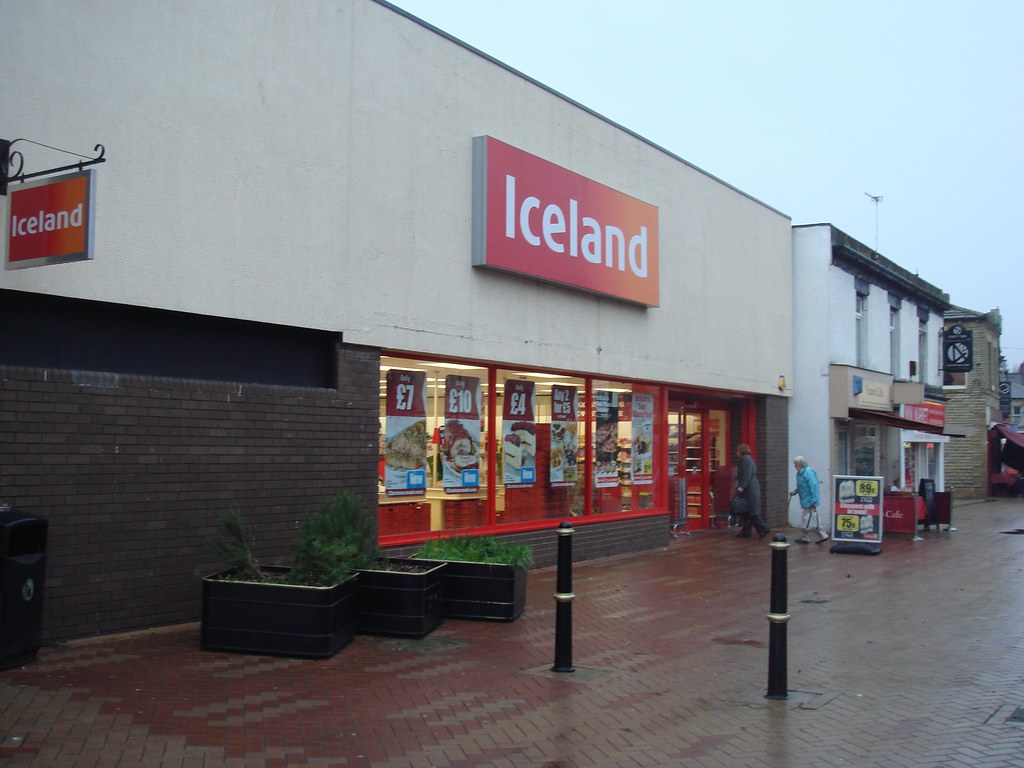 Iceland store. Photographed as part of a project by Ossett Academy in 2014/15. 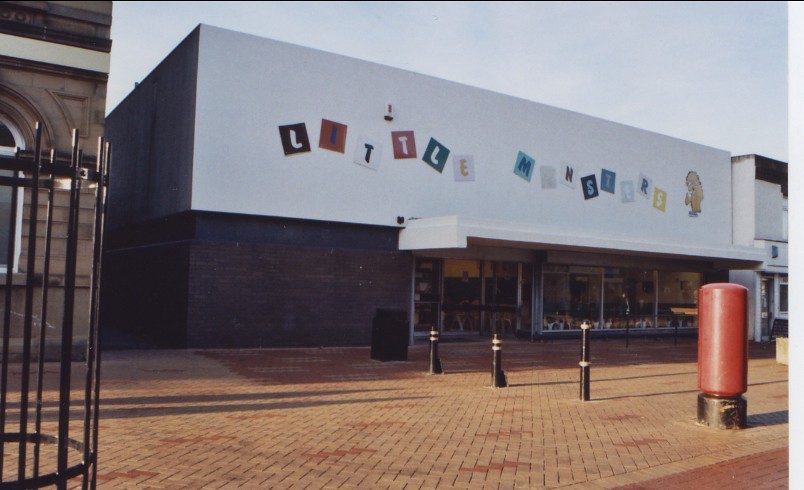 The second part of Tape 1 of the "Nettleton Tapes".

Arthur Shaw then talks about his mothers family, the Cleggs, moving to Westfield Farm. His grandfather, Arthur Clegg was born in 1859 and Arthur's brother George was born in 1860. I think they both worked on the farm. From my research I can only find one other brother, Robert Wilson Clegg who became a painter and decorator so Athur's remark on the tape that there were "a few others" that "moved elsewhere" is a bit of a mystery. I have also looked to find mention of the Eastwood's farm on Town End but without success. This is where Arthur thinks his great grandmother, Ann, who married David Clegg, lived.
Sam mentions the Chapel on Wesley Street that, on demolition, went to fill a Mill Dam. I understand that this was Westfield Mill dam. Westfield Mill was used in WW2 as a barracks. He then mentions a tree that was a sapling when he was a lad that, at the time of the recording in 1989, was pushing over the wall. I think the tree is still there and the recent photo shows a section of wall removed to allow it to grow. If you look at the photo of the Clegg's stack yard illustrating Section 1 the tree to the left of the haystack may well be this tree.

Westfield Farm just before it closed in 1986. The land was then used for housing. 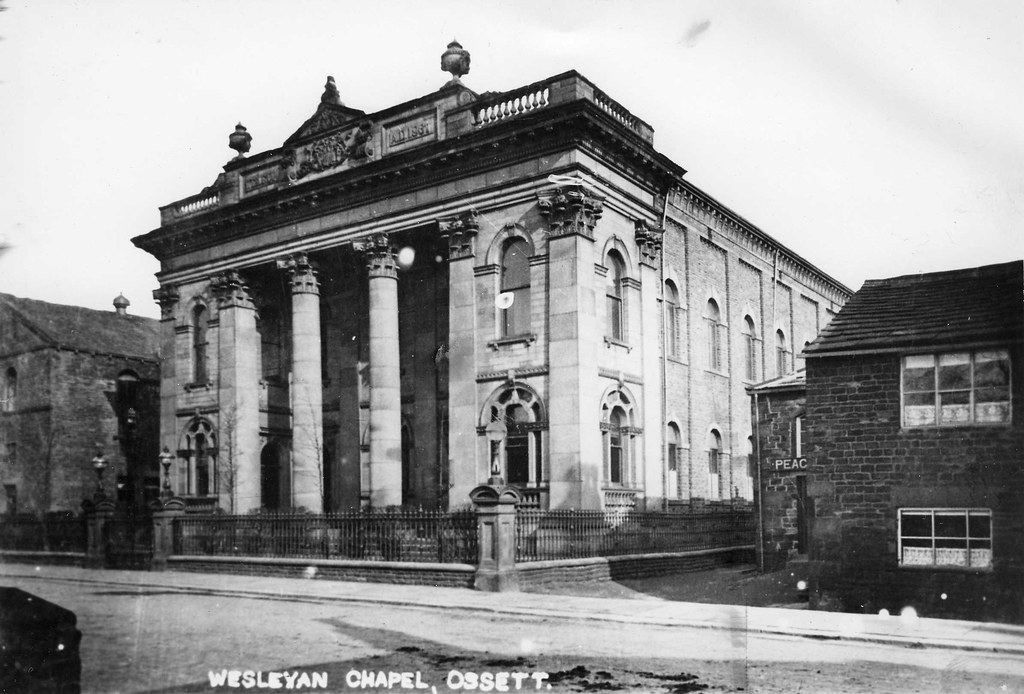 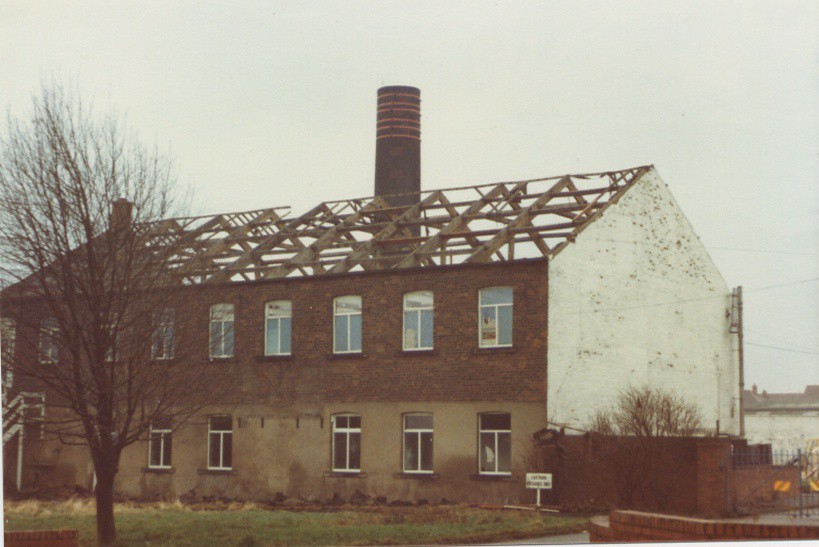 Westfield mill, Wesley Street being demolished 18 December, 1983. It was used in WW1 as a barracks where a number of people were billeted who later became famous. These included Godfrey Evans the England cricket wicket keeper and Terry Thomas, the actor. 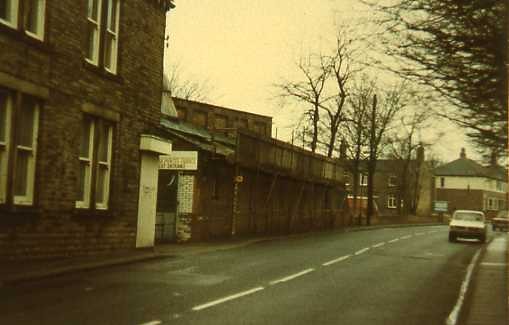 Another photo of part of Westfieldfield Mill photographed in 1983. 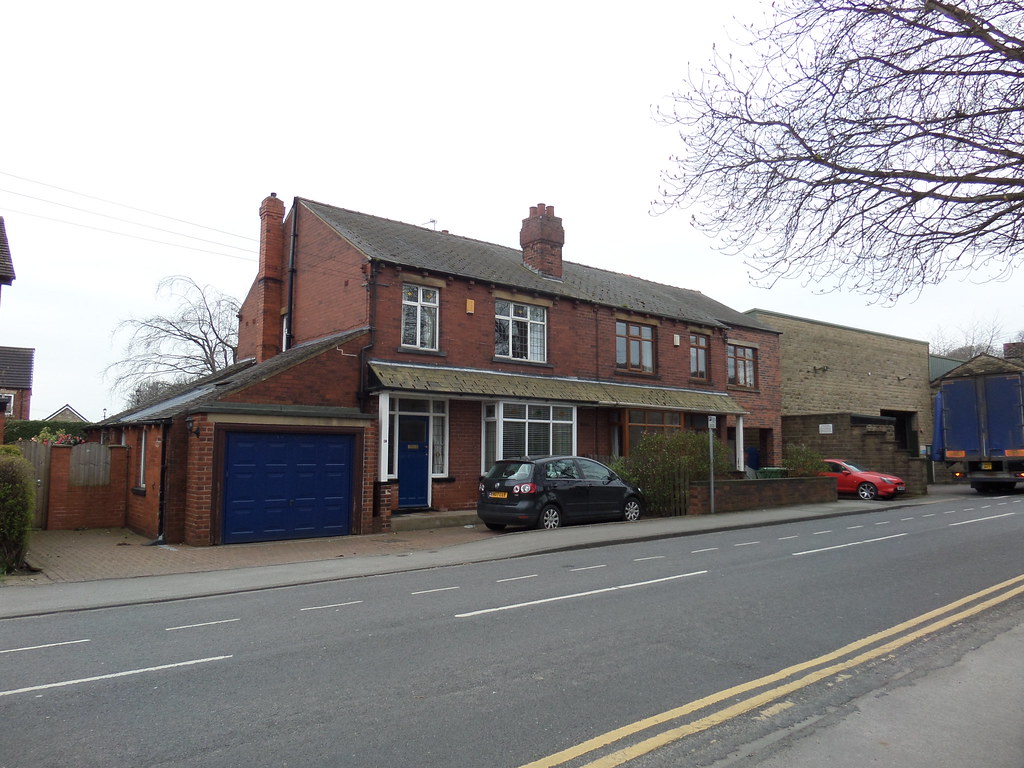 Houses that now stand on what was Clegg's farm at the bottom end of Wesley Street. 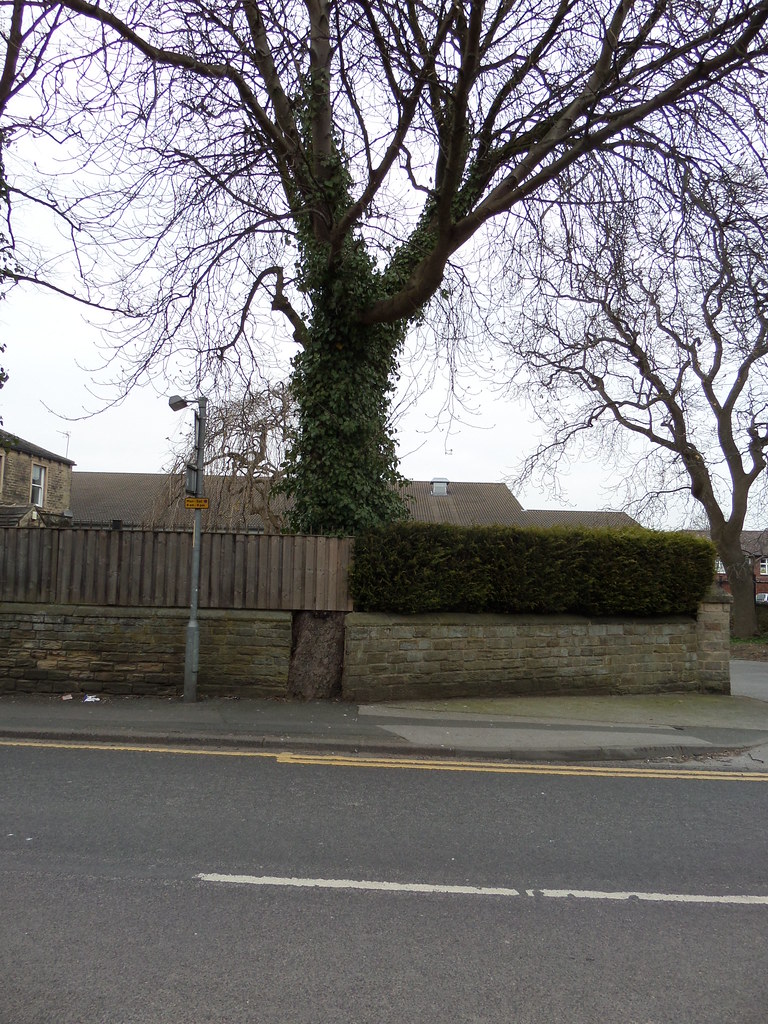 What I believe is the tree mentioned by Sam Nettleton that was a sapling when he was a lad but was pushing the wall down when he was interviewed in 1989. Notice the section of wall taken down to let it grow through.

This is my notes on the end of the second part of Tape 1 of the "Nettleton Tapes". I have to admit there are parts of this tape that I cannot follow but I have left them in as they may mean something to one of the many local historians. Sam goes on to talk about the Shaw family. It seems that at least three generations were barbers/hairdressers. On the 1871 census Frank Shaw was living in Dale Street and he and his wife, Hannah, had eight children aged between 20 and 3 living (including Ben )with them. Frank was a hairdresser. On the 1911 census Frank, aged 83 is a retired hairdresser living at 3, Wesley Street with his wife Hannah aged 86.
Ben in 1891 was 29 and living on Station Road with his wife, Ruth Hannah and 1 year old Stanley. By 1901 there were three boys, Stanley 10, Frank 8 and John 6 but unfortunately Ruth Hannah had died and Ben's sister, Mary aged 46, had moved in as housekeeper. It seems that Frank and John were hairdressers and took over Joe Mitchell's shop. It seems that aunt Mary (Polly) was still there and sat, in her long apron, crocheting. It seems that over the shop was a Building Society.
Sam goes on to talk about her their neighbour, Mary Townend. It seems that the local doctor, Dr. Mills, regularly sent his patients who were suffering with boils, etc. to her. I spent a long time listening to the tape to hear what was said about her treatment. In the end I had to ask local historian, Ruth Nettleton if there was a local dialect word for a poultice as this is what I thought was being referred to. I thought the word sounded like "spence" but Ruth knew straight away that it was "spetch" meaning a sticking plaster. In fact Mary was so well known for her treatment that she was referred to by locals as Mary Spetch (not Townend). I found the word "spetch" does appear in an ordinary dictionary as "a thin strip of leather used for repairs" but it has the Yorkshire dialect meaning of "sticking plaster".

Now I'm going to listen to some more tape to see what other stories I can find. The next installment of the 'Nettleton Tapes' can be found at https://yarncommunity.org/stories/595